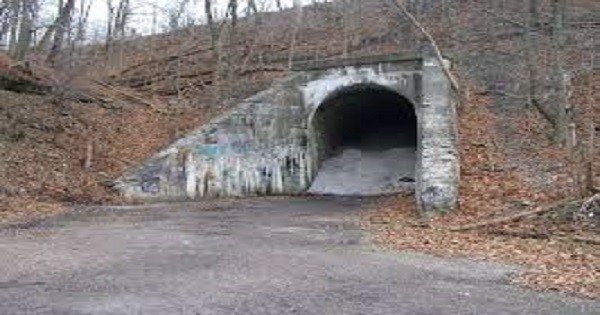 In the 1950s a man worked for an electrical company. He was working on powerlines when he was electrocuted, melting his face and turning his skin green. His name was Charlie No-Face.

After his death, he would be seen in the tunnel near where he worked. If you turn off your car engine and honk three times, you will see the glowing green man. If he touched your car, his electrical charge would either stall the vehicle or make it difficult to start.

Another lore is of a man who took his wife and kids into the tunnel and murdered them with a hatchet. If you go far enough into the tunnel you will find him and he’ll chase you out with the bloody hatchet.

Charlie No-Face was a real man. His name wasn’t Charlie though. It was Raymond Robinson. He wasn’t an electrician who was electrocuted either. When he was a young boy he climbed a pole with power lines on a dare. There was a tragic accident that left him disfigured. He had no eyes and no nose. The older he got the more reclusive he became, taking to walking at midnight so his neighbors wouldn’t see him. His evening strolls only added fuel to the Charlie No-Face legend. He did gain some friends as people would bring him cigarettes and beer for his walks.

The tunnel that “Charlie No-Face” is supposed to haunt is in South Park, Pa where the city keeps the road salt used in winter months.

As far as the murderous man with a hatchet, we found no evidence of this event happening. We scoured news articles and the internet for any mention of a man murdering his family, or anyone, in Green Man’s Tunnel, but there is no evidence that this happened.

The story of Ray Robinson is sad enough. He was a carefree boy who mad a tragic decision that would affect the rest of his life. If Green Man’s Tunnel Haunted? I’m skeptical; however, there has been videos on Youtube that show things are not completely normal in the old railroad tunnel. Is that attributed to the Green Man? Or could there have been other violence that is leading to the purported hauntings of Green Man’s Tunnel?

We don’t know. The legends of this admittedly creepy tunnel are compelling, we remain neutral on if the location is haunted by anyone or anything. Green Man’s Tunnel is on the list of places to investigate.

Check out more of our Case Files!